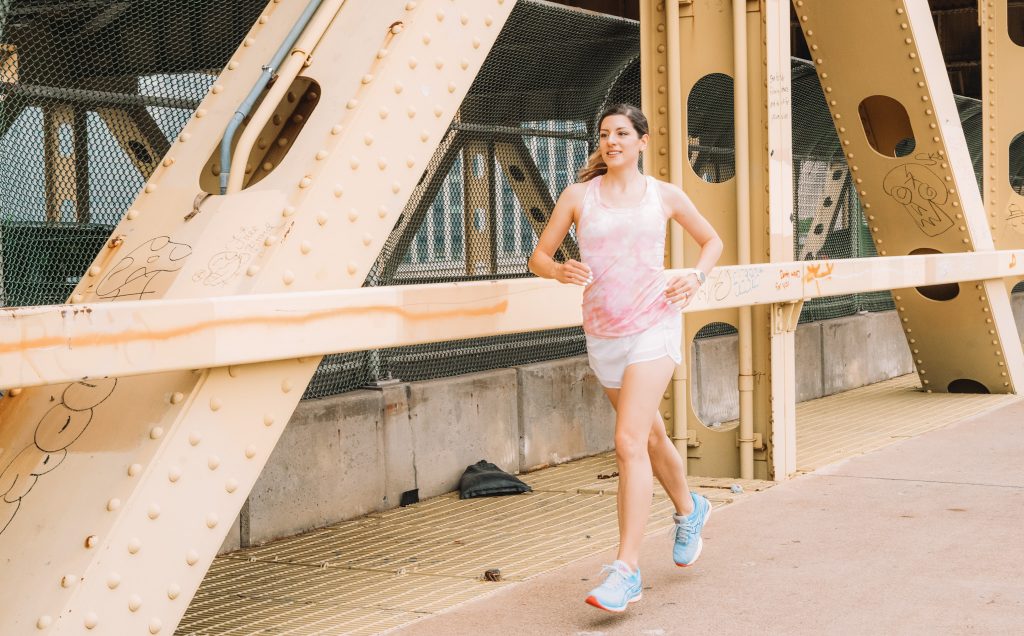 I know what it’s like to struggle with running because I’ve been there.

It might sound insane, but I started in the same exact seat as where many of you are sitting now.
I was not running at all.
I actually hated running because the one time I gave it a try I immediately got shin splints and gave up and swore it off forever.
Yet, despite myself and my colossal running failure, in 1 year I was able to progress into this…

This is my husband and I after completing our first marathon

And I went on to complete many many more races...

But again, I need to emphasize to you the fact that I was exactly where you were when I got started in 2014

Maybe some of these feelings will resonate with you….

If you’re feeling ANY of these, you’re in the right place, friend.

If you’re not reaping the many mental and physical health benefits of running, you are missing out!

You can successfully find the time and motivation to run on a regular basis and have fun while doing it!

I know when I first started running in 2014, I had no idea if this new running habit would stick or if I would ever come to enjoy it…
The only thing I knew was it was worth trying.

Seeing so many others reaping the rewards of running…getting in shape, improving their mental health, completing races, building confidence and mental strength sounded like a dream to me.

So I decided to go for it…

I signed up for my first 5k in 2014 in an attempt to “get in shape” for my wedding and I ended up getting a lot more than I originally bargained for.

I had no intention of continuing to run after the 5k was done.

It was crazy but I decided to learn everything I needed to learn to give running an honest try.

I had tried running before and had failed.

I constantly felt like I wasn’t cut out for running.

I never once thought I’d go on to complete a 5k, 10k, half marathon, or especially a marathon…multiple times!

And transform my life in the process.

It wasn’t even in my headspace at the time. I was just trying to remember to train enough to actually make it to the finish line of the 5k!

After making tons of mistakes and learning from them, I figured out the formula that I had been missing all along.

And I started to love running…

I not only was getting my runs done on a regular basis…I was looking forward to them!

I couldn’t believe it.

Running was so much easier and I was actually enjoying it.

And not only that…I felt more confident than ever. My anxiety was at an all-time low.

If I could do this, what else was I capable of?

Fast forward to today and my life has done a complete 180 from before I started running.

I’ve completed various 5ks, 10ks, half marathons, marathons, and even a triathlon!

I’m in the greatest shape of my life.

I didn’t realize how much I changed since I started running. 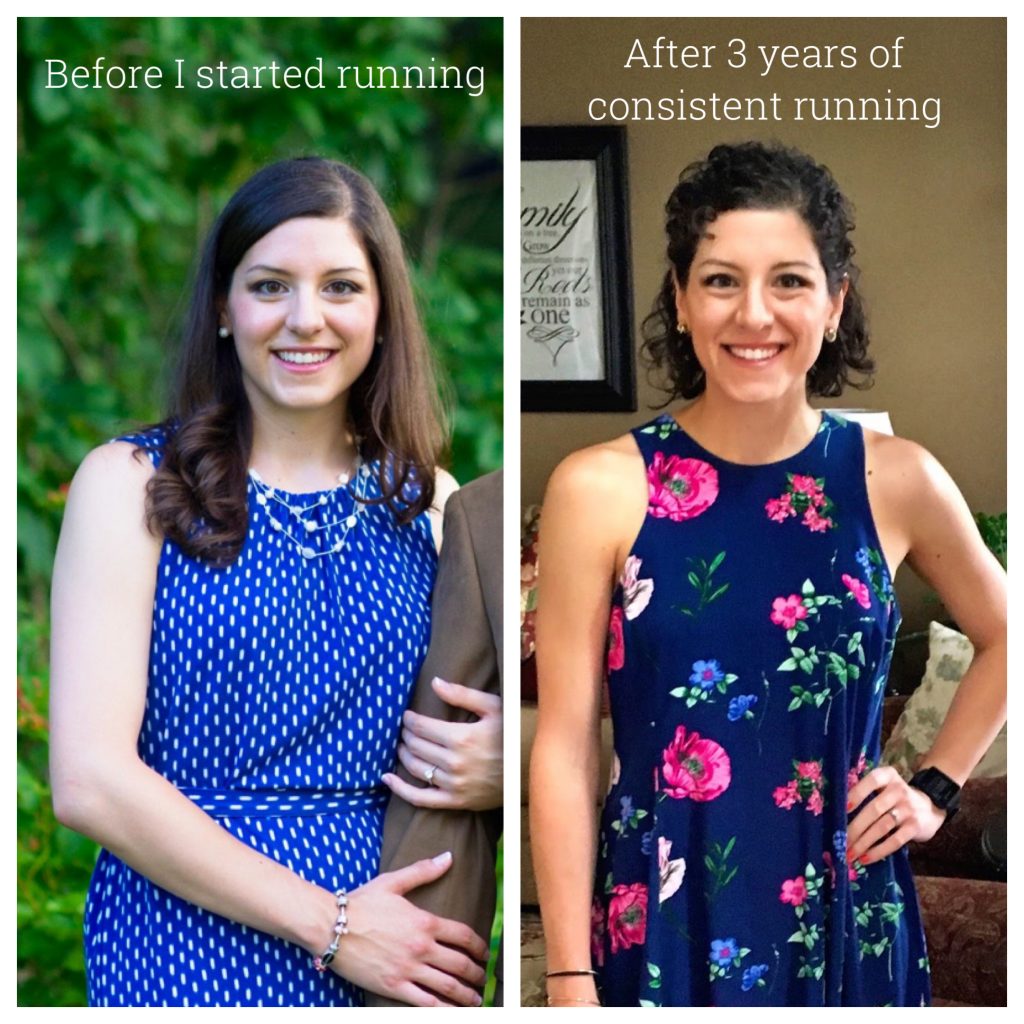 In the first photo:  I wasn’t doing any form of exercise at all.  I wasn’t paying attention to the needs of my body – I was eating a lot, drinking too much, and had a hard time dealing with stress.  I was very anxious.  I was overwhelmed by the stress of wedding planning, and I was suffering from severe eczema (an autoimmune skin condition triggered by stress).

In the second photo:  I run 4-5 days per week and have run consistently for years.  I eat healthier, don’t drink anymore, I’m more mindful, and listen to what my body needs.  My eczema is completely gone.  Running helps me to manage my anxiety, de-stress, and find inspiration.  I set big goals for myself, have much more confidence, and I’m generally happier.  Even though I have a LOT more responsibility in my life now, my stress level is significantly lower because running helps me to manage it.

What a difference a few years of running can make! 🙂

I have gained a new level of confidence that is hard to put into words.

Whether you’re starting from scratch or you’ve been running for years, I will show you how to establish a healthy running routine and reach your running goals the right way.

What’s the right way you ask?

It’s getting advice from someone who’s been there and knows what it’s like to struggle; someone who can guide and support you along the way

There are lots of new runners out there frustrated and searching for motivation, direction, and that are clueless about how to run in a safe way to avoid injury or actually reach their goals

This is the answer you’ve been looking for…

Before I share more, let’s look at the common mistakes you are probably making…

Take a second and imagine a world where you love to run, have plenty of motivation, and you have an exact plan to follow…

What Runners Are Saying...

I was training for an upcoming race and I wanted to get back into shape after quarantine. Before working with Lauren, I was running a mile at a 10:30 pace. Now, I’m running comfortably at a 9:15-9:45 pace. I think Lauren is professional, kind, and encouraging. She always answered my questions and comments right away via text.
-Precious L.
Ohio
Over the course of these months, her coaching has led me to shave off one minute of my min/mile pace while also increasing my mileage 5K to 10K.
-Izzy R.
Louisiana
By following the interval plan for almost three months, I was able to slowly ease back into running after being on a hiatis from running for a few years. I am now able to complete a 5k distance again without any walk breaks and look forward to my runs.
-Lauren T.
Pennsylvania

Work 1:1 With Coach Lauren As Your Running Coach 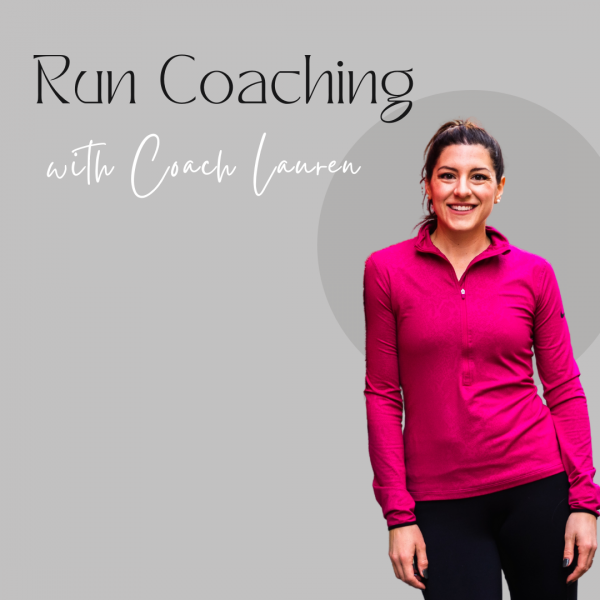 Assessment Phone Call:  We’ll start with an assessment phone call where you will share your running background, history, and goals.  We’ll chat about what it will take to get you to your goal and how I can support you in the process.

Guidance and advice from Coach Lauren – RRCA Certified Running Coach:  You have me at your disposal to ask any running questions you have, receive running advice and guidance.  I draw from my RRCA Certification knowledge, my previous coaching experience, as well as 7.5 years of personal running experience

Customized training plan tailor-made just for you, updated on a regular basis:  After I gather all the important pieces of information from you, I will put together a training plan to help you get to your goal.  This plan is made specifically for you and is made to fit YOUR life and YOUR schedule while also focusing on getting you to your goal.  The plan will be shared with you using the VDOT02 Run Coaching platform, an easy-to-use training platform for including the science and formulas of legendary coach Dr. Jack Daniels

Cheerleader to help you reach your goals: I will be your biggest cheerleader every step along the way.  I LOVE to cheer my athletes on via Instagram or Facebook and I especially love to encourage and build up my athletes as they prepare for a race

Periodic check-ins:  As your coach, I will be checking in with you on a regular basis.  We stay in close contact about how your runs are going, how you’re feeling, how your motivation and mindset are, and any challenges you may be experiencing.  I will help you work through roadblocks and adjust your training plan as needed depending on how your training is going

Accountability:  I will hold you accountable for your workouts.  Some people thrive on having an accountability partner to help keep them on track.  That’s what I’m here for

Motivation: I help you to identify where you get your motivation from so that you can draw from it when things get tough

Support:  Last but not least, you will get my support every step along the way.  I am invested in your success and growth as a runner.  I love to see my athletes achieve their goals! This 28 page E-book contains the fundamentals of running in order to ensure that you are getting started in a safe way.

The Beginner Runner’s E-Book guides you through how to establish running goals, how to choose running gear and equipment, how to get the right pair of running shoes, how to do a dynamic warmup, how to hydrate for your runs, basics about good running form, how to fuel your runs, injury prevention tips, and more!  You will have all of the information and knowledge you need to run your best in a safe and responsible way! Get access to the private Facebook Group:  Female Runners: Tips and Support for Women Running for Mental Health.  Connect with other runners, share tips, ask questions, and support each other

What Other Runners Are Saying... 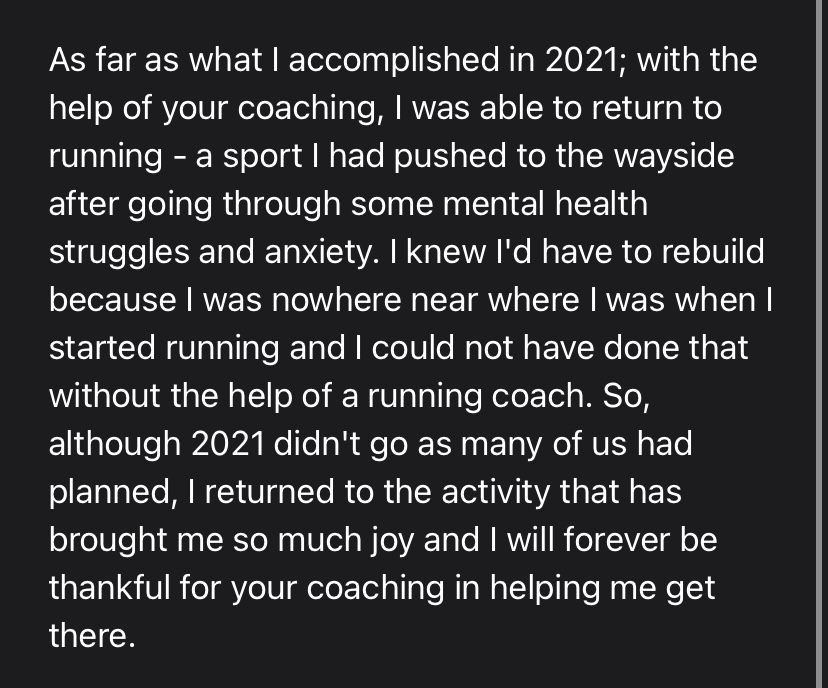 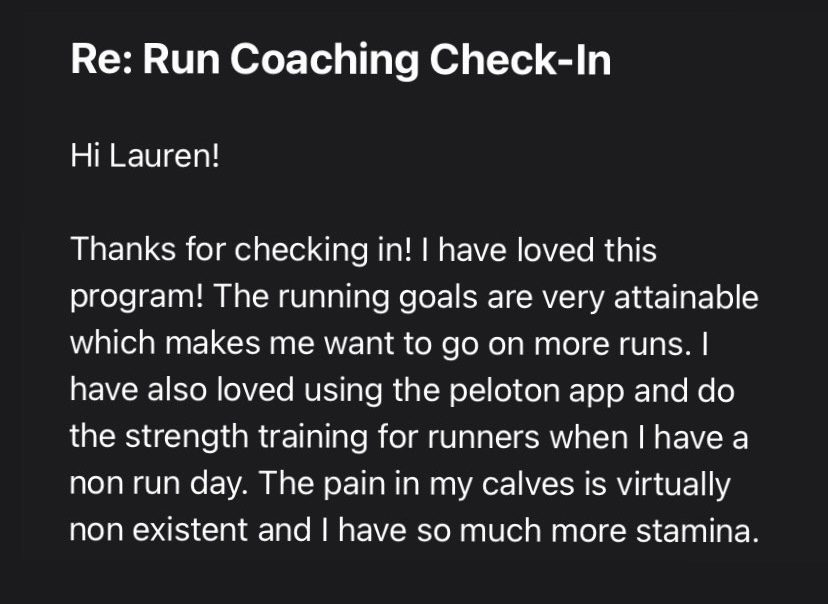 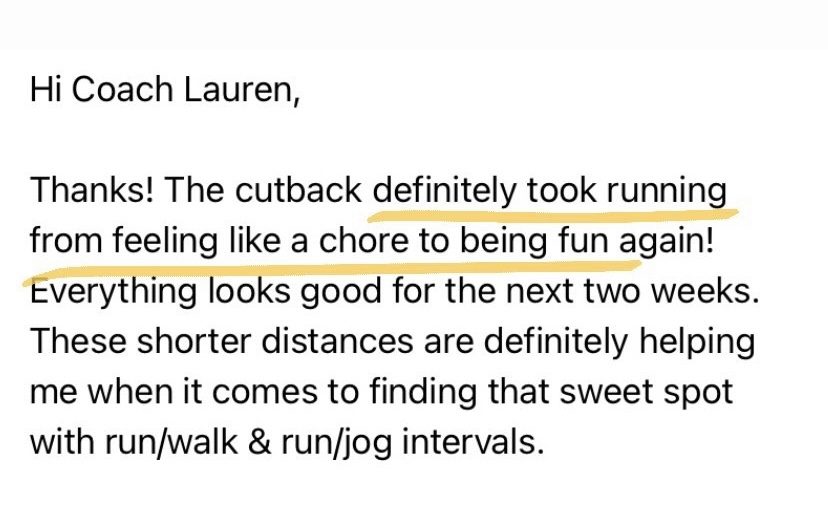 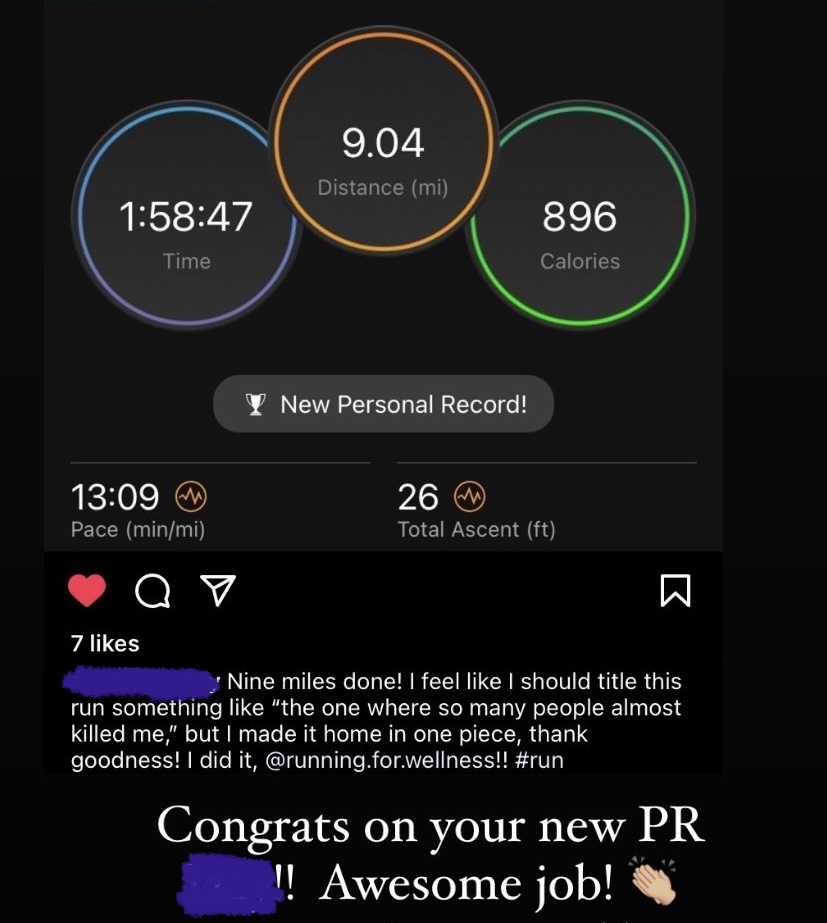 How does run coaching work?

You will share your running history, background, and goals with me. I create and share a customized training plan designed to help you reach your unique running goal. I hold you accountable, provide one on one support, and give positive reinforcement to get you to your goal!

Do I have to sign up for a certain number of months?

No! My coaching is month to month. You do not need to sign a long-term contract and you can cancel whenever you want.

Do you offer a referral discount?

Yes! If you refer a friend and they sign up for coaching, you will both receive 15% off your next month of coaching!

How do you deliver the training plan?

I will create a customized training plan for you and share it via VDOT02. You will get a free VDOT02 account which you can access via your computer or through an app on your phone. You can automatically sync your workouts to VDOT02 using Garmin or Strava.